Below you will find a series of real-life case studies highlighting the many benefits of Balance Active, both in residential care and in the home.

Here we present a short video demonstrating the simplicity of the equipment and the ease with which Balance Active can be assembled.

Mrs BW is an 89 year lady with dementia who is a resident in a care home. She is mobile with one stick in a stooped position and is unsteady at times. Staff were concerned about her risk of falls. Due to Covid 19 there are no Physiotherapy or Occupational Therapy visits being undertaken in the care home at the moment.

Registered Nurses, trained in the use of Balance Active assessed Betty and developed a plan that included some balance and strengthening exercises along with everyday tasks which she was able to do in standing. BW really enjoyed these and her posture and standing tolerance have improved.
The staff noted…

“BW is loving doing functional activities with Balance Active and she was laughing while doing it the other day. Without it she wouldn’t be able to stand and do this. We are now incorporating this into her care plan for daily activities. Look at her posture when exercising with me – it’s amazing! She normally walks around crouched and unstable. It’s definitely helping her physically and improving her mood”.

Without Balance Active Mrs BW wouldn’t have had any therapeutic intervention. Wellington House Nursing Home in Bradford are meeting residents needs in a very person centred way using this innovative product to improve not only mobility but quality of life.

Mr KM is a 98 year old man living in a nursing home. Prior to using Balance Active he washed his hands and face in sitting using a bowl brought to him at his bedside. KM said he really wanted to stand at the sink to wash his own face so Balance Active was used next to the sink to provide anterior knee support, allowing KM to stand. The front legs were removed to allow the unit to be positioned close to the sink and KM was transported in his wheelchair to the sink.

He was assisted into standing and can now use his upper limbs to wash his own hands and face. He was delighted to be able to see himself in the mirror carrying out normal personal activities. Use of Balance Active also promoted use of his lower limbs and trunk and ensured personalisation of care and dignity. 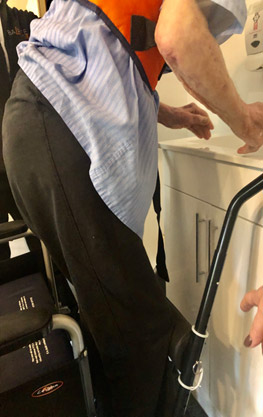 Mr TM is a 88 year old man living in a residential home. The care staff noticed that Mr TM was becoming more unsteady when walking and were concerned that he was at risk of falling. They asked if Balance Active could help him. A remote functional assessment was carried out and Mr TM was assessed undertaking prescribed exercises using Balance Active (under supervision of care staff).

He really enjoys these sessions and asks staff to get him the Balance Active – he now views this as part of his daily activity. Staff have been trained to safely supervise him so this form of activity is becoming the norm. Staff report his walking has improved, along with his mood – he is now aiming to visit the seaside (which the care home are trying to arrange). Use of Balance Active has given Mr TM wider goals and enhanced his quality of life.

JP is a 76 year woman who suffered a haemorrhagic stroke leading to right sided weakness several years ago. She made good progress with rehabilitation – she walks with a stick and drives an adapted car. Over time she noticed that her right leg felt stiff, particularly at the hip. This was affecting her ability to walk – she struggled to stand fully upright and found it difficult to take weight on her right leg, making her move more slowly and feel unsteady.

When assessed by her physiotherapist (Sheffield Neuro Physiotherapy) she was found to have right leg weakness and muscle shortening, particularly in her hip flexors, causing her difficulty taking weight through her right leg. As a result her balance was adversely affected (she was unsteady) and her walking ability starting to reduce – she was unsteady indoors and felt unsafe outdoors. Together they decided to try  Balance Active as a means of improving her standing balance and walking. Balance Active enabled her to perform new exercises in her own home that help her stand upright, so her tight hip flexors are stretched and her weak hip extensors are recruited functionally and strengthened. Her physiotherapist said: “There is a real case for it reducing staffing requirements when delivering effective therapy as without Balance Active an extra pair of hands holding her knees would be needed”.

JP is able to practice on Balance Active for 15 minutes, twice a day including symmetrical and asymmetrical standing, upper limb stretches, rotations, loosening up her thoracic and lumber spine and unilateral reaching. Her physiotherapist noted: “She’s improved in her balance, her range of motion, her awareness of her legs, her walking is measurably faster, stepping, foot placement, hip and knee placement have improved. She feels an especially big difference in her hip – it is less stiff. She can’t wait to buy it and keep doing more of the same – she is really enjoying he therapy!”

JP was asked I where she’d be if she didn’t have Balance Active over the past three months: “My walking would be worse, I’ve done similar exercises on a stander and it doesn’t open up the front of my hips in the same way. I’m able to walk both indoors and in the surrounding countryside”. 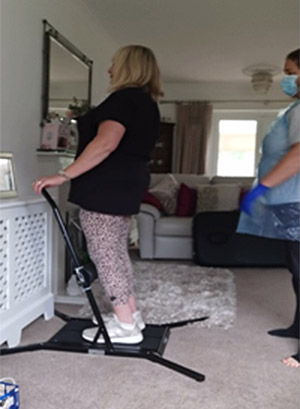 For more information or to contact us about BALANCE ACTIVE® please email info@balanceactive.net.
Alternatively, you can call Rachael Smith on 07825 271166 or Jayne Duffy on 07596 203292.